It’s the most wonderful time of the year….

I hope you sang that line…you know… like that Xmas song and the Staples jingle?  No? Yes? Ok. Moving on…I’m not talking Xmas or back to school.  I’m talking about my favourite time of the year…CNE time!!

The news broke about the new food items at the CNE a few days before opening.  I was quite impressed with this year’s offerings and of course was very excited to try as many of them as my stomach could handle.

The day began early, just after the opening.  Always best to get there early and avoid the food line ups. The first meal of the day was from Far East Taco.  I selected the kalbi and bulgogi bao, both items I have eaten in previous years.  I’ve always enjoyed them, but this year I definitely noticed a difference.  The bao was much bigger, fluffier, but I found that it overwhelmed the filling.  Still made a good breakfast however. 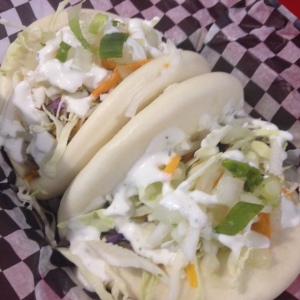 Now it was time to start trying the new food offerings.  First up was Bub’s Bad @SS Burgers and the beef patty cheeseburger.  Yes, you heard me, a cheeseburger with a split beef patty as the bun.  Quite a tasty burger.  Seasoned well.  A nice change to the typical cheeseburger.

Next up, Jake’s Lobster for some garlic snow crab fries.  My FAVE of the day.  The fries were perfectly crispy and never got soggy.  The garlic aioli was delish, though there could have been a bit more of it.  The feathery shredded crab generously covered the fries like snow.  I’m craving this right now.

Always time for some drinks.  Some vodka lemonade at the beach bar and then a nice glass of cab merlot at the wine bar near the shopping area.

After all the savoury, it was time for some sweet.  Out to the midway to find some deep-fried cheesecake.  Creamy vanilla cheesecake, dipped in batter and fried perfectly.  Then back to the food building for some deep-fried red velvet Oreos.  I expected them to have a redder hue, but no matter, they still tasted great.  I am a sucker for Oreos. 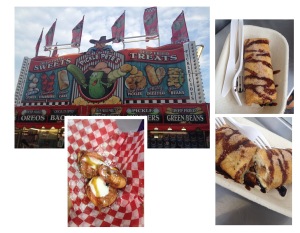 Time for deep-fried gnocchi.  Pillowy potato nuggets with a slight crisp dipped in some tangy marinara sauce.  A good snack. 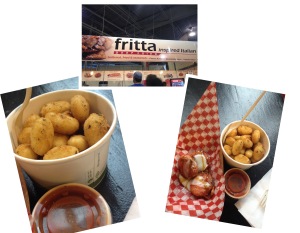 Chicken waffle on a stick was something new this year too.  Isn’t everything better on a stick?  Enjoyable.  Some fruity sherbet as a palate cleanser.

Eating at the CNE may have ended, but that didn’t mean I wouldn’t continue to eat at home.  Had to get some Jamaican oxtail with rice and peas.  I was disappointed last year (they sold out), so I was determined to get some this year (tears would have been shed if I didn’t).  Craving satisfied.

Lastly, I needed some Filipino snacks.  Banana Turon – plantain banana, rolled in brown sugar, wrapped in a spring roll wrapper and fried to a golden colour.  When I see this anywhere (including my parents house), it always comes home with me and I can eat a ton of it.  FAVE!  And then there was ukoy – a shrimp fritter made with thinly sliced potatoes, some bean sprouts, dipped in batter then fried and eaten dipped in garlic vinegar.  I rarely eat this outside of the CNE, so it is definitely a nice treat for me. 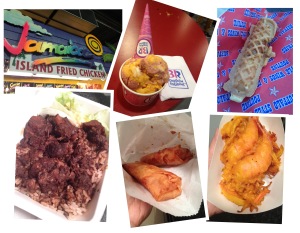 Yet another successful CNE eating event.  Was able to eat all the new food items I wanted to try.  Threw in some shopping and laughs on top.  It was a fantastic time. =)

It’s that time of year again! The CNE is in full swing. Unofficially symbolizing the end of summer, this event gives me prime time for eating. A two day event for me, the food extravaganza began with food truck frenzy. 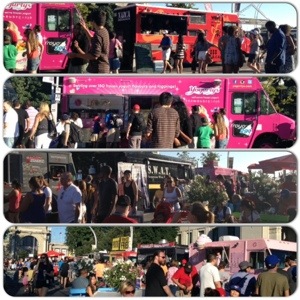 My beloved gnocchi poutine. How I dream of you always! My FAVE!!!!

Asian tacos from Far East Taco. This one is a fish taco.

This one is Bulgogi. This one will be a yearly item from now on. So good! 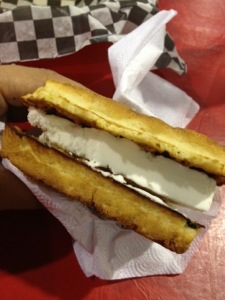 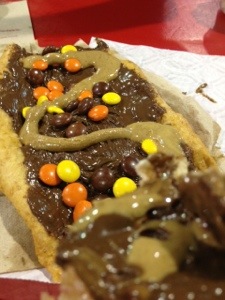 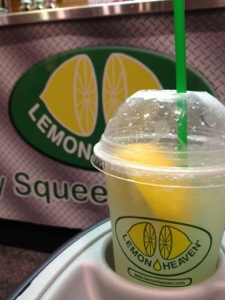 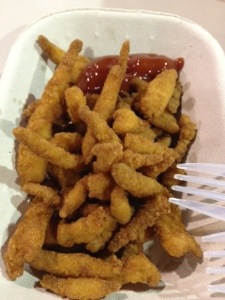 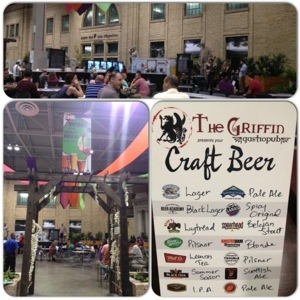 Hanging in the beer garden. 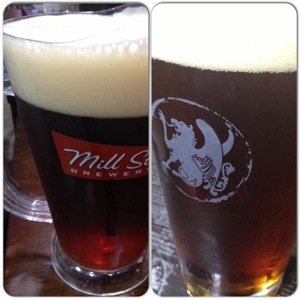 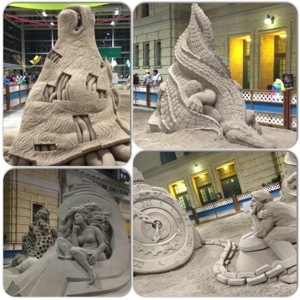 It wasn’t all about food. Check out this years sand sculptures. My fave was the one titled watching time. Something haunting about it.

Tight rope walkers and my beacon, the CN Tower.

Perogies and a cabbage roll, always on the food list.

This is The Bananza – Fried banana, Nutella, peanut butter, marshmallows, strawberries and jam. Why did I never think to make this!!!??? Drool. 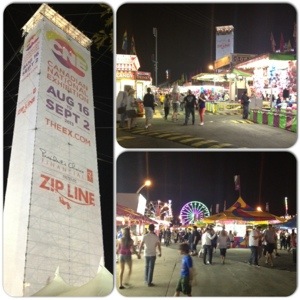 Another year done. Until the next food feast. Can’t wait to see what yummy creations appear in 2014. =)

Visit #2 to my happy place. The goal this day was not Food Trucks, but rather try out all the new food vendors at the CNE this year.

Bacon, tacos and pulled pork were on the menus everywhere.

First stop was Thyme & Olives, a Lebanese bakery for a Halloom Cheese Sesame Purse. Halloom cheese is a mild cheese that is sturdy and stands up well to grilling. It has a slight squeakiness when you bite into it, like fresh cheese curds. A little bit salty in taste. And it was shaped like a purse. What girl isn’t into purses? 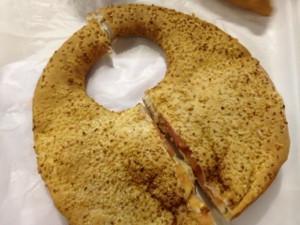 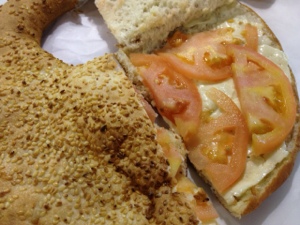 Crispy sesame thin bread and tomatoes. I am obsessed with tomatoes these days, not sure why. This was a great appetizer.

Next was Far East Tacos.

You guessed it, tacos with an Asian influence.

I opted to try the traditional corn tortilla taco and the Bao taco,or taco in Chinese steamed bun dough. In the corn tortilla I selected the fish and in the Bao, I went with the Bulgogi – sliced sirloin in a Korean BBQ sauce. 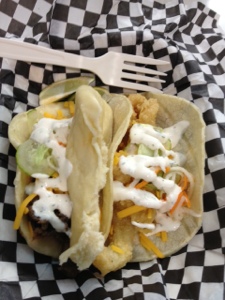 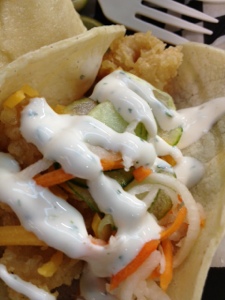 I have to say I absolutely loved the Bao taco. The steamed bun dough was so soft and sweet tasting paired with the bulgogi – AMAZING!!!!

Picking up the pace a bit now. I saw the lights of Pull’d and was immediately drawn in.

Let’s talk pulled pork. Yes, I am a fan.

I of course had a couple staples of the CNE diet – deep fried Oreos and Perogies. Favorites for sure. 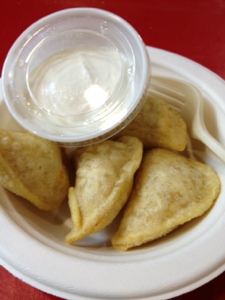 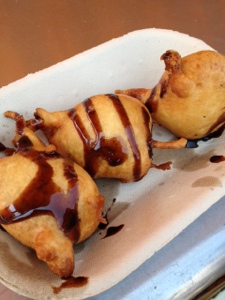 Walking around, saw this line up… 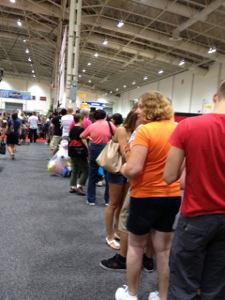 Joined it and ended up in a cheese seminar.

We sampled some Dofino herb and spice havarti, bocconcini, Brie Damafro, aged cheddar by Organic Meadow and Tiger Blue by Poplar Grove. I really liked the Dofino cheese, it was so smooth and creamy. I’m a big fan of Brie Cheese, even better when melted. That Tiger Blue – not for the faint of heart, but it was delicious. I used to be scared of blue cheeses, but they are beginning to grow on me. So good!

Back to the food building for some sweet stuff. A simple apple fritter, dipped in cinnamon sugar. 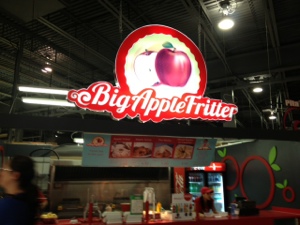 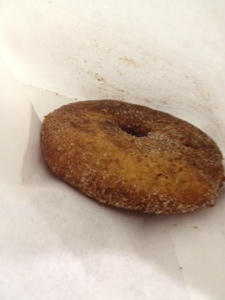 Does anyone agree that Icees are hard to find these days? This is the original. Blue red mix ALWAYS! 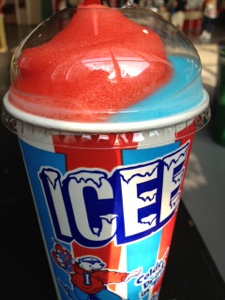 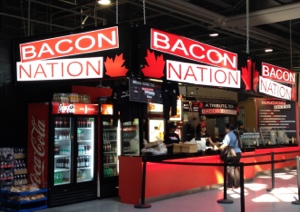 Looks gross, I know. Believe me when I say, it wasn’t. 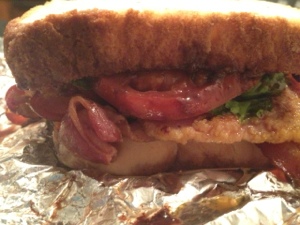 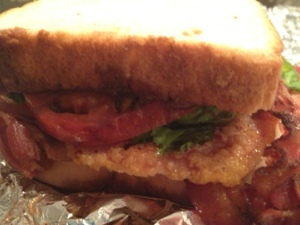 It was salty, it was sweet, it was full of bacon, it had tomatoes, it was ridiculous and fantastic. Mmmmm.

Another year done, what does next year bring? I can only imagine… =)

© Sweet Spell Baking. Unauthorized use and/or duplication of this material without express and written permission from this blog’s author and/or owner is strictly prohibited. Excerpts and links may be used, provided that full and clear credit is given to Sweet Spell Baking Blog with appropriate and specific direction to the original content. 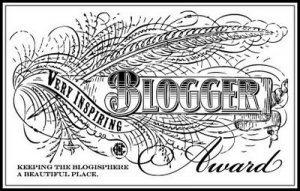